On friday, December 14, 2012 I took half a day of vacation time and went to the courthouse to inspect the voting records.  I learned about the different types of voting records available and the quality control checks they currently do with the machines.

Sandra Gritz, the deputy election commissioner met with me.  She was very helpful and cooperative, explaining her job to me, what the different election documentation is and how it is stored. Here is what I learned:

RTAL:  Real Time Audit Lot – This is the paper tape that records every button ever pushed on a voting machine.  This is what I need a court order to get access to.  There is a chip in the machine that also records everything, but it’s erased the day after the election results are finalized in the electoral college.  If I could obtain a court order for the next election, I might be able to access that data electronically, but I can’t for past ones.

The actual tapes are going to be a giant PITA!  This was not unexpected. sigh. The 2010 general election RTAL tapes are stored in approximately 20 or 30 cardboard cartons in a warehouse somewhere in Wichita.  They had had to go there and pull out the 2 or 3 cartons that had the records I looked at today.

We went through the rolls, looking for the one from Countryside Christian Church.  Four precincts voted there.

Here is a picture of a result tape:

I took a picture of the tape for precinct 208, or rather I thought I did. Despite practicing a bit with the camera the night before, I only managed to successfully take one picture in three or four that I thought I did.  I asked permission to take Sandra’s picture, but alas, it was one that I did not actually succeed at. I did get one picture of Heather (another employee) accidentally though.  I’m pretty sure I took that when I was putting the camera away.

Sandra and Heather were quite nice, helping me search through the records.  Heather found the roll from that polling station for the scanner.  With a total of only six votes scanned, I don’t think I need to search through the scanned ballots.  Only one was for precinct 208.

I spent about an hour and a half there total.  Sandra and Heather were both busy with other tasks for the most part but were so much more efficient than I at handling the rolls of paper tape that they managed to look through far more than I did.  Sandra found the one I needed in the second bin we searched through.

Before I start in on the details of the data, I want to talk about the physical set up of doing an audit.  The RTAL’s are large and unwieldy to work with.  I can now truly appreciate the commissioner’s response that they cannot manage the workload.  The voting machines use these rolls of paper: 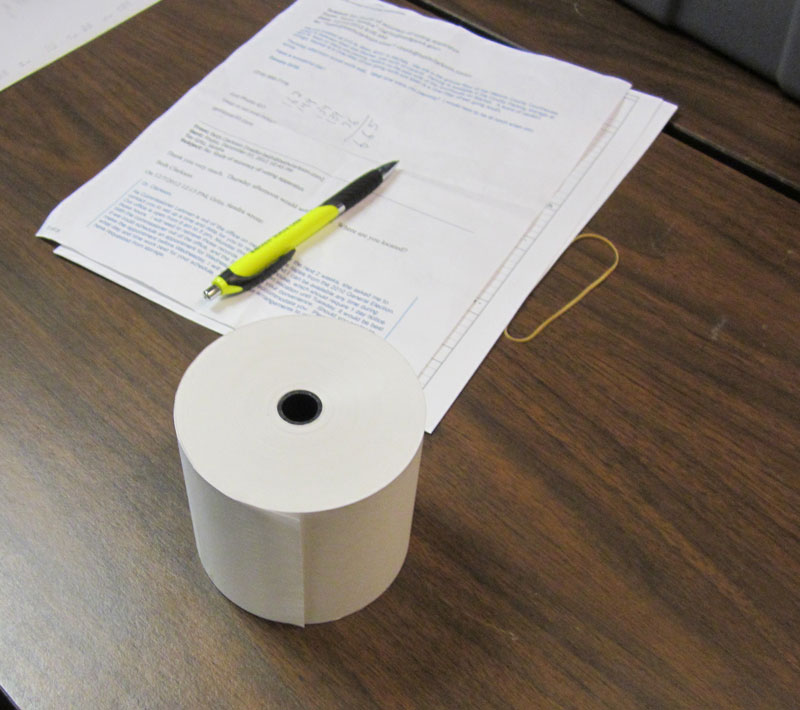 Sandra tells me that each roll of tape will hold around 70 ballots.  For the precinct I’m looking at, 208, I’ll have to examine the full tapes for all 9 machines from the polling center.  The tapes record everything, included any changes of mind before pulling the final level.  To conduct an audit, I’ll need to pull all the tapes for a polling station and then go through the each and every tape in it’s entirety.  Just to pull all the tapes for a polling station is likely to take a full day at the warehouse.  Or they’ll have to ship 2 or 3 dozen boxes to the courthouse to let me go through them there.  My rough estimate – I’ll need to find and audit the results of 20-25 RTAL tapes.  I think this will take 1 to 2 weeks of full time work, possibly more.   I’ll need help if I can get it.

This is definitely a long term project!

Sandra also explained the various tests and checks they put the voting machines through prior to every election.  They are open to the public, so I am welcome to attend the next one.  It happens five day prior to an election.  They always tally perfectly when they run their tests. She tells me if I come, I will be the first person to do so in her experience working there.

I ask if there is any way for the machines could tell if it was a real election or a test, but Sandra tells me “No.  They run exactly the same programs and procedures for tests as they do on election day”.  Later it occurs to me that programing in the actual election days would be a relatively easy part of any scheme to fraudulently manipulate the vote via software.

A simple check to determine if the date (which the each machine must know because they print the date and time on the RTAL’s) is the first Tuesday after the 1st of November of an even numbered year.   It would be more difficult in the more recent elections with all the advance voting and mail in voting and that would lessen the effect.  Additional input would be needed to subvert the primaries as Francois Choquette and  James Johnson are hypothesizing, but it’s not an impediment to accomplishing a subtle software subversion of the voting machinery for votes cast on election day in general elections.  After all, who would run a test on an election day? It’s enough of a major logistical challenge to just put on the election.

The Results Tapes:  There is one results tape produced for each polling station for an election.

Header Info:  The header contains the serial number of the terminal (hardware used to compile this) and the software including version number, release date and copyright info. This is followed by the election and polling station identification.

Public Count:  This gives two listing that are the same number.  They are labeled the “Total Ballots Cast” and “Total ballots Counted:” at this location for this election. Sandra indicated she didn’t know of any instance when they were not the same.

Number of Terminals Opened: This gives the number of terminals (voting machines) at the polling location for the election.

For the 2010 general election, there were 922 ballots cast on a total of 9 terminals at the Countryside Christian Church in Sedgwich County, Kansas.

S/N: The serial number of the machine is provided:

Public Count: This gives the total ballots cast on this machine for this election.

Protective count : This gives the total ballots cast on the machine since it’s introduction into use.  All RTAL tapes are kept and theoretically, can be matched up to the machine, thus providing a continuous track of all ballots.  This allows inspectors to ensure that all votes have been counted.

OPENED and CLOSED:  This provides a time and date stamp for when the machine was set up to start recording votes and when voting was closed for the day.

Terminal Ballots Counted: This indicates the total ballots that were counted. It seems to be always the same as ballots cast.

Precinct listings: The result of each ballot question for that precinct is provided, including any write-ins.  The bottom of the tape is signed by the polling station officials.  There is no breakdown by machine.  The smallest sampling unit is therefor limited to a precinct.  However, since a polling station can contain more than one precinct, it’s very little additional work to audit the results for all 4 precincts at the Countryside Christian Church polling station.  Essentially a cluster sample.

After identifying the precinct, the ‘public count’ is provided.  This is followed by the Ballot Style Counts, which is exactly the same number as the ‘public count’.  I suppose the duplicate counts are done by separate sub-routines.  No doubt if they don’t match, it’s indicative of a problem or some special circumstance that can be programmed in when needed.

After this the ballot questions and results are listed one by one.

The RTAL tapes are the tapes that record each individual ballot choice by each voter.  This is the record that voters can see being made and inspect after they have cast their ballot.  I always check mine and have always seen that it recorded my vote correctly. To access these, I must obtain a court order directing the commissioner to allow me access to them.

In order to audit a results tape and verify that it has properly tallied up the individual votes recorded, all RTAL tapes for all machines for a precinct will have to be found.  These tapes all contain information about the public count and protective counts along with the serial number of the machine, so having the full dataset can be determined before proceeding with the analysis.

Sandra thought it might be possible to scan the tapes.  She made a copy of some sections of the results tape for me. She had to charge me$0.25 for each page.  I have a receipt for it.  If the tapes can be scanned, hopefully the electronic files could be purchased for a reasonable price. I’ll ask her to look into for me and give me an estimate of the cost.

[1] Advance voting works differently because citizens from all over the county can vote at any advance polling location.